In the face of multiple risks, 'We need to do more', Llanto urges public, policymakers 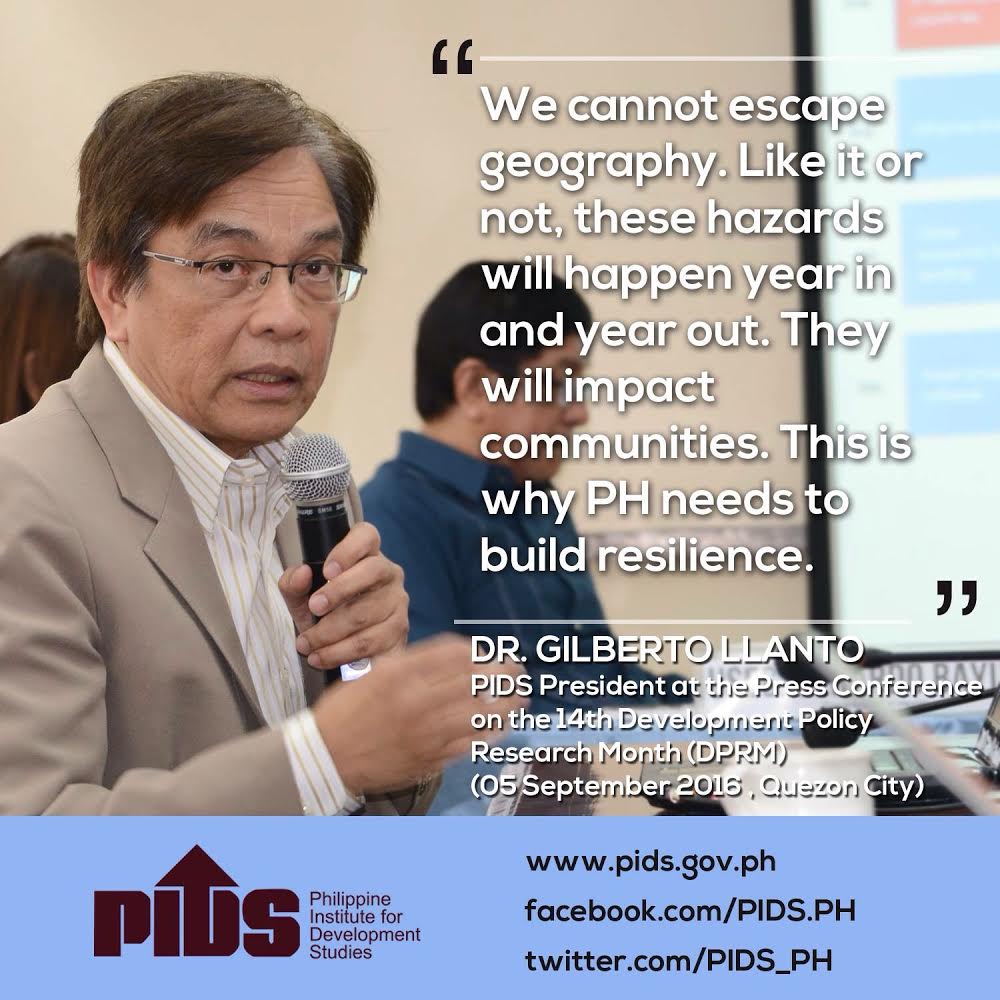 "We are doing things right, but we need to do more."
This was the message of Dr. Gilberto Llanto, president of state think tank Philippine Institute for Development Studies (PIDS), during a press conference in Quezon City in line with the celebration of the 14th Development Policy Research Month (DPRM).
The press conference, which was conducted in partnership with the Philippine Information Agency, was part of a series of events the Institute has organized throughout the month of September.
The DPRM is celebrated across the country every September in view of Malacañang Proclamation No. 247 issued in 2002. The proclamation declares the observance of a DPRM to promote and draw public awareness and appreciation of the importance of policy research in the formulation of sound policies, programs, and projects. The proclamation also designated PIDS as the lead government agency in the yearly celebration of the DPRM.

"By resilience, the DPRM underscores not just resilience to the effects of climate change and natural hazards but resilience to all kinds of risk factors, whether economic, financial, environmental, technological, geopolitical, or societal," Llanto said in his opening speech.
Also with him were officials from member-agencies of the DPRM Steering Committee, namely, Philippine Information Agency Director General Harold Clavite, Civil Defense Public Affairs Chief and Spokesperson Romina Marasigan, Department of Health Undersecretary Gerardo Bayugo, and Chief Information Officer Oscar Lizardo of Project NOAH or the Nationwide Operational Assessment of Hazards.
No escaping geography
During the press conference, Llanto presented the risk landscape outlined by the World Economic Forum, highlighting the varied, interconnected, and constantly evolving nature of risks.
He explained that this year's DPRM aims to influence the country's policymakers and different sectors to make policies and programs that can help the Philippines become resilient in the face of multiple risks.
He also cited a United Nations study listing the Philippines the second most at risk country in the world to natural hazards and disasters.
In the agriculture sector alone, for instance, the cost of damages to property caused by tropical cyclones amounted to roughly PHP 36 million in 2014, according to data from the Office of Civil Defense.
"We cannot escape geography. Like it or not, these things will happen year in and year out," he explained.
The Philippines is located along the Pacific Ring of Fire, which makes it vulnerable to frequent typhoons and earthquakes.
'Not enough resilience'
Llanto clarified, however, that while we are exposed to multiple risks and very vulnerable to them, the Philippines is not hopeless.  In fact, the country, he said, is doing fine in terms of the growth of its gross domestic product (GDP).
As of the second quarter of 2016, the Philippine GDP grew 7 percent, according to the latest data of the National Economic and Development Authority.
"We are in an era of political stability, and we are able to put our house in order," Llanto said.
During his presentation, Lizardo also added that the Philippines currently has "world-class" facilities that can help the government assess the behavior of hazards. For flooding, the country, he said, is equipped with hazard maps and flood modelling simulations that can identify the most flood-prone areas down to the barangay level. His agency has likewise developed hazard maps for landslides and storm surges that local government units can use for planning disaster risk management and land development.
"I cannot think of any country in our particular region that does the same," the chief information officer of Project NOAH said.
Despite these successes, Llanto cautioned: "We cannot be complacent and that is what we want to emphasize in this year’s DPRM." He stressed that other areas may still be needing improvement although the country has already implemented outstanding strategies in addressing environmental and health hazards.
Llanto also bared the country currently does not have enough resilience due to the institutional and policy reforms done by the previous administrations.
"However, there is a need for us to broaden our understanding of risks and resilience. We need to look beyond natural hazards and acknowledge that the sources of risks are many and that those risks are interconnected," Llanto explained.
"We are a very vulnerable country. We have to do something, not only about the environment but also about developing resilience in our local communities," he added.
He said these communities should have absorptive, adaptive, and transformative capacities, able to withstand various shocks and stresses and more resilient to change than their previous states.
'Develop resilience thinking'
The PIDS official explained that while the government has already created different types of responses, such as climate information systems, what the country really needs is to "develop resilience thinking".
"We need to make this idea [of resilience] filter down to the last household in local communities," Llanto told the members of the press.
He said it is important to raise the awareness of households on the things that are happening around them, othe

rwise "they will be caught unprepared."
The DPRM theme of building a resilient Philippines is aligned with the focus of the Institute’s new five-year research agenda for the period 2015-2019. "The studies of our experts in agriculture, health, fiscal policy, among others, in the next five years will be guided by the said theme," Llanto said.
Other press conferences related to the DPRM are expected to be held in Pampanga, Legaspi, and Tacloban. A joint policy forum with the World Bank-Philippines on small and medium scale enterprises development will also be conducted on September 8. A seminar on social protection and risk management co-sponsored by the Institute with the University of San Carlos in Cebu is slated for September 29. The highlight of the DPRM is the Second Annual Public Policy Conference on "Risks, Shocks, Building Resilience" on September 22 in Pasig City. 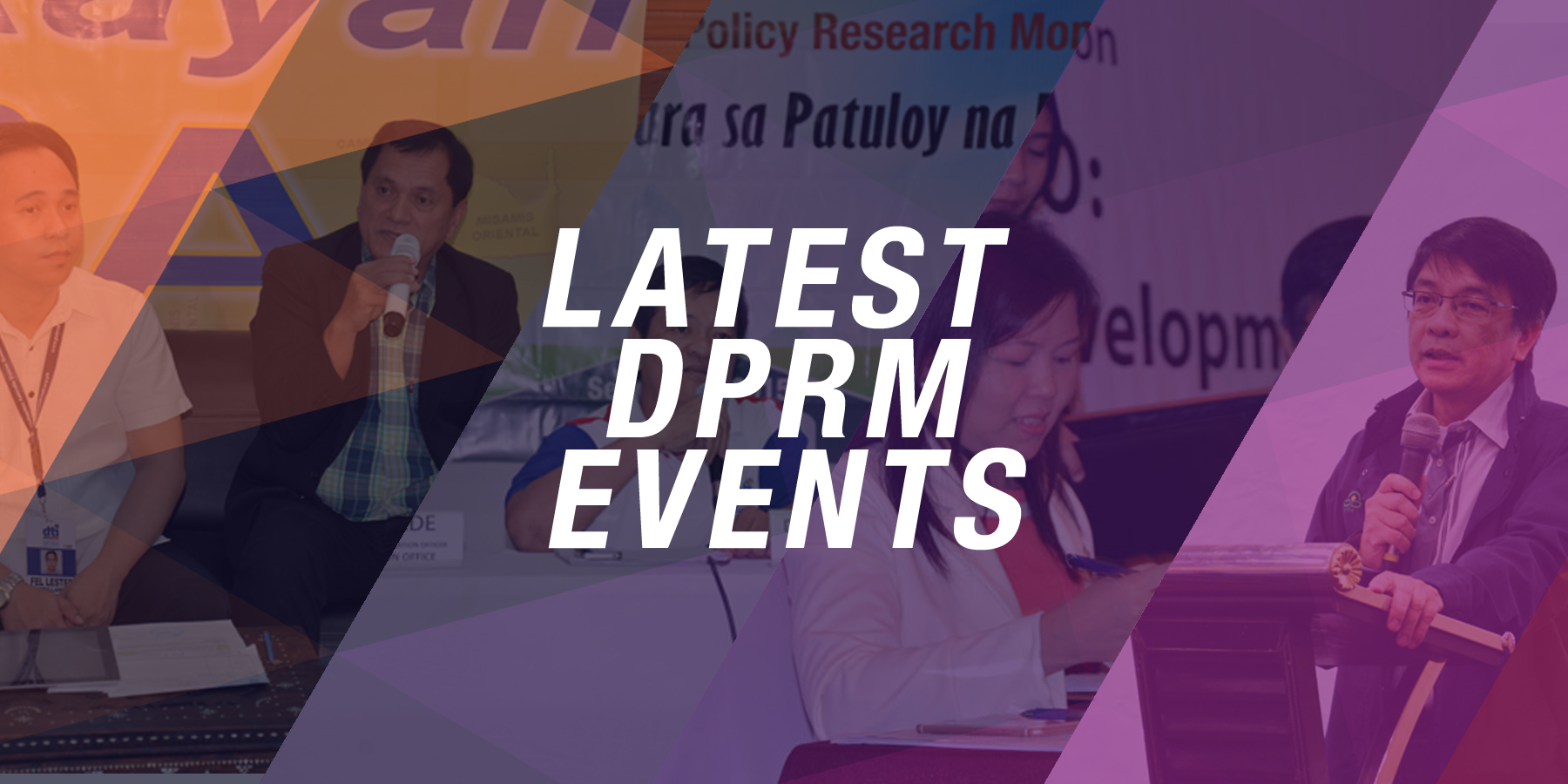